We are delighted to be supporting punk royalty -
Vic Godard & the Subway Sect - on March 10th, 2012

Check out our first official video!

"ANARCHY on the streets of London forced a rock band from Tunbridge Wells to abandon one of its gigs this week." 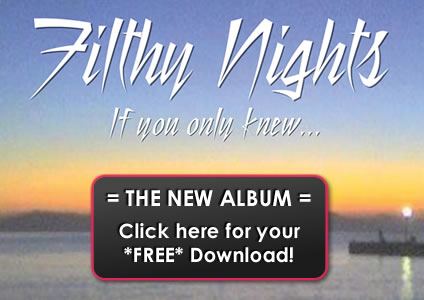 Filthy Nights are a punk influenced rock n roll band from South East England. Drawing on influences from the worlds of Rock, Punk and Indie, their swagger and sing-a-longs have already been recognised by various music industry officials. However, Filthy Nights are keen to ensure they make their music on their own terms and so far have chosen to release their music themselves.

With infectious sounds and lyrics that resonate with not only the young generation, but also with the frustrations of those eager to cut loose from the monotony of a '9 to 5' life, the band released demo EP 'Los Debutantes' in December 2009, followed by their debut full length 'If You Only Knew...' in June 2011.

Filthy Nights is a gang of friends with extreme ambition, killer songs and memorable live shows – a combination that's helped them build a rapidly growing base of loyal followers – followers who revel in enjoying music they can associate with and truly be a part of.

Click a cover to hear the aural goodness! Don't forget, 'If You Only Knew...' is still available *FREE*

Sally in the Alley

A filthy feast for the eyes...eat up! Still not satisfied? Head to our Youtube channel